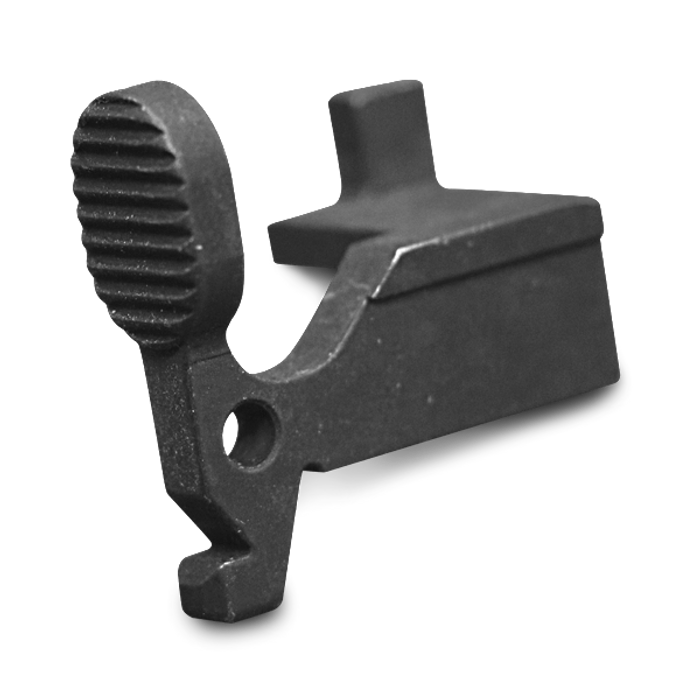 AR rifles that have been converted to shoot .22lr are a great and inexpensive way to shoot. Unfortunately, when a standard AR-15 is converted to .22lr through a conversion bolt or replacement upper, the bolt catch stops working.

Magazines that hold the bolt open after the last round are a good stopgap but it doesn't offer the same functionality as a standard AR and most ranges won't let you leave an empty magazine in your rifle in order to keep the bolt open and show that it's clear.

This is where the Catch22 comes in. The Catch22 is a direct replacement for your standard bolt catch and will work with most common .22lr conversions. To install, just punch out the bolt catch roll pin and replace the stock .223 catch with the Catch22.

PLEASE NOTE: The Catch22 is not backwards compatible with .223 bolts.

For the bolt catch to provide true last-round-hold-open, the magazine that is used needs to have a follower that sticks out of the back and will engage the bolt catch after the last round. Because of this, different magazines will offer different last round functionality.

• CMMG / Black Dog "Standard" (X-form, Sonic Weld, etc.): These magazines have a follower that sticks up after the last round is fired, but it doesn't reach out of thee back which is required to hit the bolt catch. The bolt catch will need to be manually engaged to hold the bolt back after the magazine is removed.

• S&W 15-22: These magazines have a follower that can hit the bolt catch consistently after the last round is fired and are the best way to get last-round-hold-open functionality. These magazines need to be shimmed using a Catch22 stick-on or clip-on adapter to take up the slack in the magwell as they are more slim than a standard AR magazine.

FREE SHIPPING APPLIES TO ENTIRE CART
MSRP:
MSRP:
Our Price: $29.00
Click for Price
IN STOCK
Add to Cart The item has been added

FREE SHIPPING APPLIES TO ENTIRE CART
MSRP:
MSRP:
Our Price: $2.50
Click for Price
IN STOCK
Add to Cart The item has been added

FREE SHIPPING APPLIES TO ENTIRE CART
MSRP:
MSRP:
Our Price: $7.50
Click for Price
IN STOCK
Add to Cart The item has been added
Write a Review
Rating:
1 Review